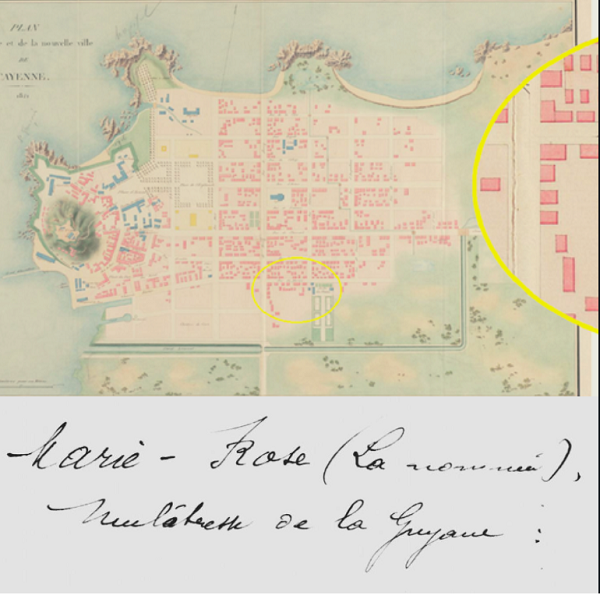 Recently, while studying a whole bunch of memoirs of Frenchmen deported to French Guiana at the end of the 18th century as part of the French Revolution, I realized that several of them referred to a certain Marie-Rose, a woman of colour. So I conducted the survey to find out more and I wanted to share my results with you because as always I find this type of story exciting. If you have not yet read it, you can discover the first post on Marie Rose Sequiera #1 The Benefactor of the Deportees of the 18 Fructidor of Year V (1797) which more particularly evokes her interactions with the deportees according to their accounts. Today, I am continuing the portrait of Marie-Rose or the social rise of a woman of colour in French Guiana in the 18th century.

All the testimonies of the deportees of the 18 fructidor of the year V seen in the previous post described the benefits that Marie-Rose had been able to bring them; but it didn’t tell me much about Marie-Rose’s life itself. The Bishop of Orléans, Jean Brumauld de Beauregard, is the only one who tells the story of this woman: « A certified missionary, with whom she had long been a housekeeper, left her when he died for his property. She took a very lucrative state, she established herself to give food and provide large meals. The inhabitants of Cayenne like to enjoy themselves outside their homes, just like the English from whom they have taken this use. She bought all the rare things in Europe; the inhabitants of the colonies could not find anything too expensive. In this way, she had become very wealthy. » [Un missionnaire assermenté, chez lequel elle était depuis longtemps ménagère, lui laissa en mourant son bien. Elle prit un état très-lucratif, elle s’établit à donner à manger et à fournir les grands repas. Les habitants de Cayenne aiment à se régaler hors de chez eux, comme les Anglais dont ils ont pris cet usage. Elle se procurait toutes les choses rares d’Europe; les habitants des colonies ne trouvent rien de trop cher. De cette sorte, elle était devenue très-riche]

It is difficult to assess the faith that can be attributed to this account, especially since the rest of the text suggests that Brumauld de Beauregard did not have a very favourable opinion of Marie-Rose; he seemed somewhat doubtful of the friendship that others had with her and questioned the woman’s faith. So I looked to see if the archives could confirm what he said and offer me more information. 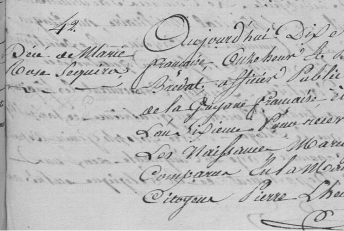 Brumauld de Beauregard reported that Marie-Rose had died a year after his meeting and André Daniel Laffon de Ladébat noted that he had learned of the woman’s death on Nivôse 21 (10 January 1799). So I started by looking for a trace of the death in the parish registers of Cayenne around that date and I actually found the deed: « the fifty-two-year-old citizen Marie Rose Sequira, a native of Martinique, who died today seventeen nivôse [6 January] at two thirty in the morning at her home on du marais Street« . [la citoyenne Marie Rose Sequira âgée de cinquante-deux ans native de la Martinique, décédée ce jourd’hui dix-sept nivôse [6 janvier] à deux heures et demie du matin en son domicile rue du marais]

First, let’s look back at where she lived. When she died, she lived at home in the town of Cayenne, rue du Marais (now rue du Lieutenant Léon Becker). A map from 1821 shows the location of the street from his residence to the edge of town, near the botanical garden.

It is surely in this house that Jean Freytag visited Marie-rose several times, who served as her intermediary with the beautiful Angélina. Between the lines, his account thus gave some elements about Marie-Rose’s residence; the house had a garden, a living room, a cabinet…. As part of his love affairs, Freytag had found himself locked in this office by a  » negrillonne « . He thus confirmed that Marie-Rose had people in her service, whether they were slaves before 1794 or free after the proclamation of the first abolition of slavery; people whom Marie Rose had been able to send and place with the deportees.

There was also this new information: Marie Rose was born in Martinique, by deduction, around the year 1747 and she had a family name « Sequira ». That was a lot of new information in a few lines, but nothing that corroborated Brumauld’s story. So I continued the research, this time from the name, until I found a file on Marie-Rose, and not just any one! 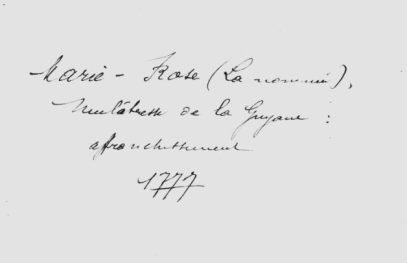 The liberation file reveals that Sieur Sequiera gave his freedom to Marie-Rose in 1775 in a deed recorded by the notary Constant on May 2, 1775. She was about 28 years old at the time, according to the age given in the death certificate. In January 1777, Sequiera, his former master, was now absent from the colony. Marie-Rose then had her emancipation officially recognized by the colonial administration, which approved her status as a free woman. Who was this Mr. Sequiera? I did not find much more information other than his mention in a 1772 nominal census. Sequiera was then a shopkeeper in the Cayenne district and her home housed 2 other people: an « negro » or « negress » and a « negrillon » or « négritte« . In other words, in 1772, Sequiera owned 2 slaves, an adult and a child. Taking into account the information contained in Marie-Rose’s death certificate, she was about 22 years old at the time of the census, so she was certainly the adult slave identified by Sequiera.

Marie-Rose’s story was beginning to become a little clearer. Still no proof that she had been the housekeeper of a certified missionary, who had left her his property at his death as Brumauld wrote, but she had been the slave of a merchant, who had left the colony and this master had « for his important services rendered to him by the supliant fact gift of her freedom » [pour ses services importants a lui rendu par la supliante fait donation de sa liberté]. (sic) It is impossible to know if the former master had left Marie-Rose what he had on the spot or some savings to acquire a property. It is still impossible to know whether or not the child enumerated in 1772 was their child or not, or what had become of him.

Marie-Rose may have been Mr. Sequiera’s housekeeper. This was a common situation in the colonies. The housekeeper « ménagère » in the colonial space was a slave woman or a woman free of colour; she kept the house in order, took care of the laundry and food, supervised the domestic life… but especially, she was also often the concubine barely hidden to the master when he was celibate, which seems to be the case here. Another deportee, Billaud de Varenne, described this status very well in a 1805 letter to his father.

«  I must tell you that I have had with me, for eight years, a housekeeper to whom I owe the extension of my sad existence, through the incredible care she took of me, in the frequent and acute illnesses I experienced here and when I was in absolute abandonment and misery.
So, as soon as the return of slavery arrived, I bought her and paid cash and immediately gave her freedom. I therefore do not assume that my family can find it bad, after the precious services that this girl has rendered to me and that she continues to render to me each day, by the order and economy that she brings to my house and by the surveillance and good behaviour that she maintains among my negroes, that I try to lift her out of poverty, in case she loses me, by ensuring that she enjoys the good that I will be able to dispose of here, and that she is entitled to, having contributed at least as much as I have, through her work, to winning it » (See original French citation pp. 193-194)

Not all slave concubines were equally treated. Some were sold when the master left the colony, others were freed by wills. Marie-Rose had not left with Mr. Sequiera, but she had obtained his emancipation. If we stick to Brumauld, she « establishes herself by feeding and providing the great meals. (…) In this way, she had become very wealthy.  » [s’établit à donner à manger et à fournir les grands repas. (…) De cette sorte, elle était devenue très-riche.] Marie-Rose would have prospered thanks to a restaurant-catering service after her liberation. Perhaps it was while living with the merchant that she had acquired the experience of preparing the great meals that made her fortune later on.

The only certitude is that Marie Rose, born in Martinique, slave of Sieur Sequiera in French Guiana, freed by him in 1775, recognized as free by the administration in 1777, had since then experienced a great social rise. She was recognized by the religious community as a benefactor, she was valued by the deportees for her various actions, she still intervened in social life through her role as intermediary, she was able to place women with deportees and place deportees in the houses of the free people of colour… Thus, although her life is today unknown, all the testimonies agree to show that Marie-Rose was a rich and influential woman whose social role and many actions had given her a unique place in the Cayenne of the 18th century.

I still hope to find some information about Marie-Rose’s life. I have a few baptisms in Cayenne with a Marie-Rose mulatto for godmother. But for the moment it doesn’t give me any more information. Perhaps his master also appears in the parish registers? In the database of slaves and freed slaves of Guyana on Manioc.org, there is a Belair dwelling held by José Pedro Sequiera, a resident owner in Iracoubo born around 1793 from what I have read elsewhere. This is a possible way forward. And you, do you have read anything about this Marie-Rose Sequiera? Do you know any other free Guyanese women of colour who left their mark on the colonial period? 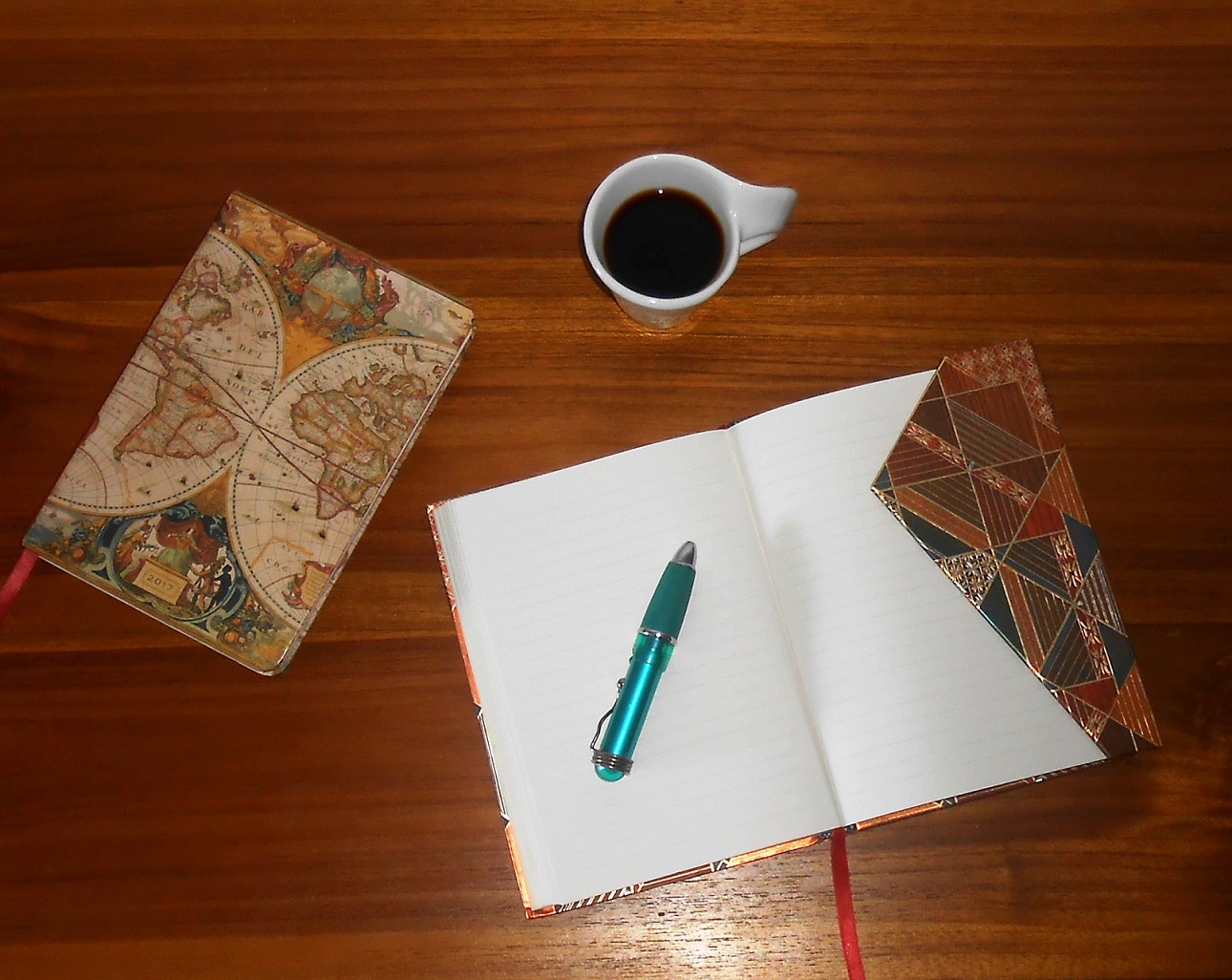 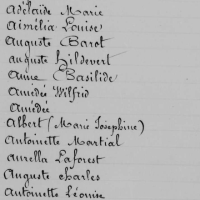 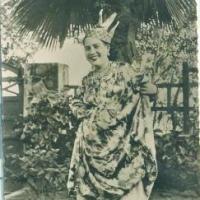 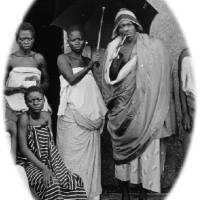 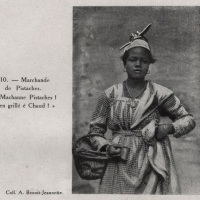 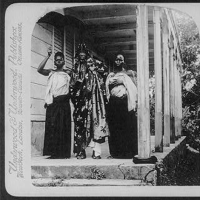 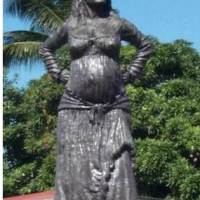 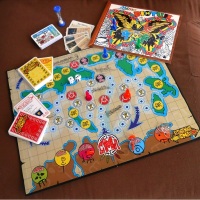